The fate of the Tame Valley at Woodley goes to an appeal inquiry following the resounding defeat of the developer’s plans by Stockport Council’s Planning and Highways Committee.

Objections are needed by September 25th 2021 at https://acp.planninginspectorate.gov.uk. Search for case 3279967. Click on “Make representation”. Registering on the site is advised though not compulsory.

Stockport”s Planning Committee voted 9 votes to 3 last March to refuse permission for big warehouses on the Tame Valley at Woodley, extending Bredbury Industrial Estate almost to the river.  Councillors from all four political parties on the Committee voted for refusal. The Council’s planners had recommended approval.

The site at Woodley is protected as green belt and as part of the Tame Valley. To the north west it abuts Botany Mill Wood Site of Biological Importance and nature reserves on the other side of the Tame. To the south west, it borders housing. The development would operate 24 hours a day turning around hundreds of articulated lorries.

Brian Bagnall, a Conservative councillor from Bramhall, led the Planning Committee’s attack on the plan, with the committee’s chair, Andy Sorton (Labour, Brinnington) being the main voice in favour. The committee delegated Cllr. Bagnall to lead its opposition to the developer’s appeal.

The appeal will be heard by one of the Government’s Planning Inspectors at a public hearing. The date has yet to be set. The developer can be expected to once again play on employment and the recent surge in demand for space for giant warehouses. They argue that Stockport must provide land for big warehousing and industrial units, and has no other space available.

The Council will undergo a role reversal in order to oppose the appeal. It remains to be scene whether the Council will, for instance, be prepared to call Transport for Greater Manchester as a witness to critique road upgrades proposed by the developer and previously signed off by the Council despite TfGM’s criticism.

Developer Quorum submitted their new version of their planning application last December  hot on the heels of Stockport councillors voting down the latest version of the Greater Manchester Spatial Framework, including a Tame Valley scheme, last December 3rd.

Quorum’s version three of their application to extend Bredbury Industrial Estate seeks to make the scheme more acceptable by reducing the built area and increasing landscaping. However, it doesn’t change the reality that the scheme would ruin the Tame Valley.

Quorum submitted a planning application in August 2019. A revised application followed in January 2020. The current third version is at https://planning.stockport.gov.uk/PlanningData-live/; search for application 074399).

In last autumn’s final version of the Greater Manchester Spatial Framework, Stockport Council bent under pressure particularly from Tameside Council and pared back the loss of green belt in the Framework’s plan for the tame Valley. Quorum’s application would concrete over a larger area.

Quorum’s current application (see top) includes two units probably, for warehousing, that are being fast-tracked as well as an outline application covering the rest of the site. Development will be phased of five years – that’s years of construction, noise, dust and heavy equipment.

The proposal to build large industrial units in the Tame Valley at Woodley completely contradicts Stockport MBC’s policy of protecting the green belt, the river valleys and the natural environment.

According to nationaL planning law, building on the green belt can only be contemplated in “very special” or “exceptional” circumstances. There are no such circumstances demanding the bulldozing of green belt in the Tame Valley.

Need for ubs of warehousing and industrial units either now or in the future can be met by other sites in  Greater Manchester.  Alternatively, the proposed units could be built on more than one smaller site.

Extending Bredbury Industrial Estate would knock a large hole in the green belt which provides a vital area of peace, fresh air and nature close to the centre of Woodley. Bizarrely, Quorum asserts that its plans will not harm the openness of the green belt or its role in preventing urban sprawl ie separating Woodley from Denton.

A visit to the site or a glance at the map of green belt shows that the area is an important part of a continuous green belt protecting the Tame Valley, Woodley and Haughton Green (Denton).

Quorum appears to be propagating a pretence that the threatened area is not part of the Tame Valley. This is absurd: the land slopes down 30 metres to the river and is well known to be within the valley. The river valleys (Tame and Goyt) are protected by Stockport’s Unitary Development Plan as well as by their green belt designation.

Quorum’s submission on Biodiversity is seriously inadequate. It implies that the proposed site has no value for nature and biodiversity. In fact, the hay fields with their long grass shelter unusually large numbers of voles and mice which provide a rich source of food for birds of prey, notably barn owls (such as the one pictured locally) which are a beleaguered species. Other birds and animals are also present.

It is extraordinary that Quorum claims that planting trees around the new industrial units would achieve “biodiversity gain”, while ignoring the negative impact on wildlife from turning hedges, trees and fields into concrete and tarmac. Quorum will also pay Stockport Council £96,000 to improve, grass, plant hedges (including around the Tiviot Way car park!) and dig a pond at Reddish Vale Country Park. This is added into calculations to show biodiversity  net gain from the development. this is ridiculous and cynical.

The development would go right up to Botany Mill Wood SBI (Site of Biological Importance) on the Woodley bank of the Tame. This is bound to harm the SBI both during construction and operation. On the other side of the Tame are two nature reserves. Inevitably the loss of such a large area of green space and the imposition of a massive logistics unit (according to the plan) will be harmful to wildlife on both sides of the river. Many species of birds are under pressure and need such habitats. 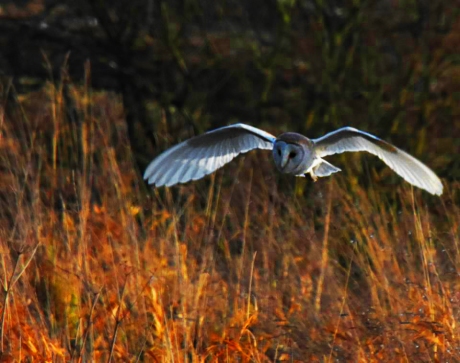 Quorum’s plan is for most of the site to be taken up with warehousing (or logistics). This is the field where automation and robots are advancing fastest. The eventual aim is for warehouses to be almost devoid of humans. (See inside Ocado’s automated warehouse https://www.youtube.com/watch?v=XJqsdprXF5c).

It is a feature of the current industrial scene that there is a shift from manufacturing to warehousing. Big new warehouses are likely to have state-of–the-art automation and fewer jobs than the developers claim. Further down the line there would be very few jobs.

SMBC’s Employment Land Review of 2018 says there is a need for only 4.8 hectares of extra land for industry and logistics in the borough. That is a sixth of the size of the proposal and can be found without building on green belt in the Tame Valley.

Quorum presents various job estimates, initially publicising 2,000 plus jobs. Since, after four years, of working on this plan, Quorum still don’t have any end users, all such figures are estimated. Quorum’s highest estimates are for a mix of warehouses and industrial units. This is unlikely. Quorum’s current estimate for 100% warehousing units is 736 jobs net, taking into account jobs replaced or relocated from elsewhere in Greater Manchester. The gross figure is around 960. At Florida Farm, Haydock, two new warehouses bigger than any planned for the Tame Valley employ only 350 people bewteen them.

The development would work round the clock, producing night-time noise and light pollution. Residents of Lowick Green and Castle Hill Park would be particularly impacted. The warehouses will depend on hundreds of articulated lorries, including night-time traffic disturbing reidents along A6017 Stockport Road (continuation of Ashton Road) through Denton.

We are told that the development has to be sited at Woodley, so that it can be close to the M60’s junction 25. Yet a third of the articulated trucks going to and from Bredbury Industrial Estate come down Ashton/Stockport Road from Denton past people’s homes.

One reason that trucks use the Denton route is because of a low bridge on Ashton Road next to Junction 25. The picture above (extracted from Elaine Pollitt’s post on Team Denton South facebook post) shows an artic turning around to avoid going under the bridge.

Quorum asserts that the bridge has little effect on the routing of HGVs. But it’s curious that figures hidden in Quorum’s own Transport Assessment (see Appendix B) show that one third of articulated lorries access the existing Industrial Estate from Denton rather than Junction 25, yet only one sixth of the somewhat smaller rigid lorries do so. If this difference is not because of the low bridge, Quorum should tell us what the reason is.

In any case, the development will result in more big lorries coming down Ashton/Stockport Road. Quorum’s plan provides 239 parking spaces for artic trailers, including 133 for the two units that would be built first. It’s reasonable to expect that a third of the extra articulated lorries will come past homes in Denton. This is not acceptable.

Quorum’s estimates of HGV numbers are based on weak data from the TRICS database. Estimates are modelled from one-day traffic surveys at 12 warehouses mainly from 2015 or before. The warehouses sampled tend to be smaller or much smaller than those proposed at Woodley, and so would tend to use smaller HGVs. There is no night data at all.

The developers propose to install traffic signals on the two M60 J25 roundabouts which will mitigate the effects of extra traffic from the development going to and from the motorway. However, traffic modelling shows some worsening of traffic conditions at the already notorious gummed-up corner of Ashton Road/Stockport Road by the Traveller’s Call. TfGM has raised doubts both about the traffic modelling and also putting signals on the Ashton Road J25 roundabout which is on the small side to have traffic queuing on the carriageway, including 16.5 metre articulated vehicles heading to the expanded industrial estate.

Greater Manchester’s Spatial Framework was a 17-year scheme across the city/region’s ten borough’s to designate sites for new housing and industry. Although most building would have been on brownfield land, the Framework became notorious for its proposed large-scale construction on green belt.

Following the Framework’s defeat in Stockport, the remaining nine boroughs are reviving the Framework with the new name Places For Everyone. Green belt is likely to be again under threat in those boroughs (apart from Manchester). Arguably, they don’t need to build on green belt to meet Government house-building requirements – unlike Stockport where brownfield sites are hard to come by.

Stockport will have to embark on a struggle to defend its green belt from property developers. House-builders are able to push through greenbelt schemes if local authorities do not have plans in place to meet Government-imposed requirements for new homes. A Local Plan must be drawn up but finding sites for the 18,000 new homes required in the borough is impossible without using greenfield sites. Within the  Spatial Framework, 5,000 of these new homes were offloaded to Manchester and Salford, who have said they will not continue with this arrangement outside the Framework.

The latest Spatial Framework’s proposals for building homes on green belt in Stockport were initially little changed from the previous version last year. A proposal for homes at Unity Mill, Woodley was dropped and homes on the Offerton High School site reduced from 250 to 185. Unchanged proposals were 1,700 homes at Heald Green/Stanley Green (but 350 of these already have planning permission); 750 homes at Woodford Aerodrome; 500 homes in High Lane and 240 at Hyde Bank, Romiley. Subsequently the 500 homes in High Lane were withdrawn and small reductions made in the proposals for Heald Green and Woodley.